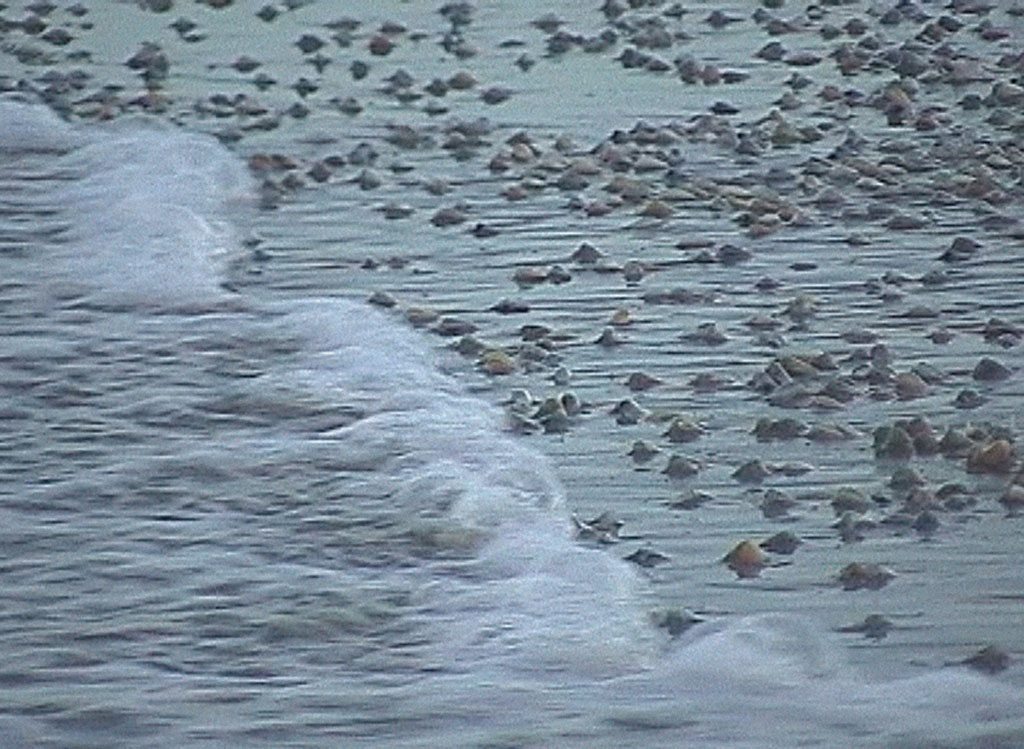 Waves of the ocean, lots of shells to eat and the familiar clatter of please-grounds – these words evoke the usual images of a Mediterranean summer vacation from our visual memory, which has been trained by photos and videos. However, the recording in question, which was in fact taken during a seaside vacation and can be described using the previous list, was not created from any one of the usual perspectives. Waves coming from the left and from above fill the picture frame, then retreat, leaving seashells which are not there to satisfy our culinary desires, but are themselves feasting on the banquet provided by the ocean. In their great haste, which is demanded and also made possible by the movement of the sea, they serve as lively, defiant, and loud counterpoints of the all-encompassing and silencing mass of water. Of course, the seashells did not come to the shore to make noise, nor to feed, since they could easily do this underwater! These, however, are not images from a documentary. Luca Gőbölyös joined the image sequences of undulating waves and the unusual performance of these strange seashells with the acoustic element of the human clatter of social dining and recreation, and gave rhythm to the noise. With the retreating of the sea and the quick appearance of the shells, the murmur of the multitude gets louder, but is replaced by silence when the waves take over the picture frame. With the help of this simple tool of creation, and of course with a title that aids us in orientation, she brought to life a montage that acts as a metaphor of „wanting to live even against the forces of nature, vitality, and adapting to the environment”.

Still, that which seems obvious should be examined more closely. Another element of this video, which becomes apparent after multiple viewings, is the „looping” which brings up questions of temporality, not only touching but disturbing the internalized routine of our sense of time. Even with such a minimalist „tone”, maybe because of the hypnotic motion of the waves or because of the concentration needed to identify the rare kind of seashells, it takes multiple viewings to realize that the final, four minute version of the movie consists of short sequences of a single wave cycle. During installation, this repetitive image sequence can be looped even further, showing it indefinitely. This is where the work becomes truly exciting, since with repeated viewing, the meaning fades away, (referring to Andy Warhol) more and more each time, while we begin to feel more and more empty.

The motion picture, captivating with its irreversible narrative, can be interpreted as a representation of modernity’s “vita active” ideal, but paradoxically, it dumbfounds its viewers into a defenseless stillness. It captivates and excites us to the degree that subjective thinking potential is suspended. According to Guy Debord’s observation, the development of capitalism has unified and forced onto society the idea of irreversible time, and by prohibiting the use of cyclic time, it has expelled the experience of the illusion of motionlessness. We consider this standardized, metric, and linear construction of time as natural, and this conviction is strengthened by the unquestioning consumption of media images. There exists, however, a strategy (praised, among others, by Warhol, Gilles Deleuze, and Guy Debord) that allows us to evade the intricate trap, which uses the power of technical images and makes the experiencing of time impossible: the technique of exact repetition. During the precise and constant repetition of a mediated phenomenon, endless possibilities emerge, within which time beyond representation can be experienced. The repetitive screening of a certain image sequence can become a gesture of the radical “hijacking” of the flow of images from our medialized world. Feelings of déjà vu may be aroused, as “The psychological duplicate (déjà-vu) enhances self-awareness by emphasizing the uniqueness of the Self in complete repetition.” (Miklós Erdélyi: Theses on the Theory of Repetition, paragraph 11, 1973).

Through the use of the loop, moving images born of “vita activa” bring back the practice of “vita contemplativa”, in the way in which we experience it with Luca Gőbölyös’s video. It may even happen that, being absorbed in Human Behavior, which presents itself as a metaphor of survival and of starting over, we catch a glimpse of the dark side of human nature, which, though usually sharply contrasting life and death, and constantly struggling against passing, may sometimes wish for the silencing return of the waves again and again.