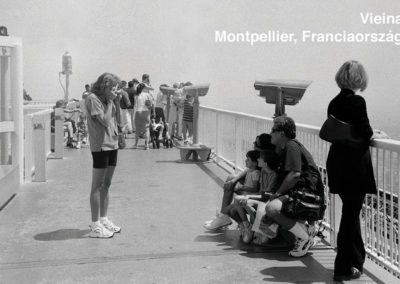 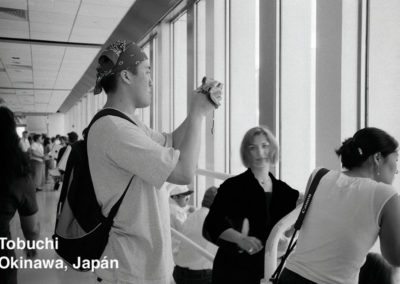 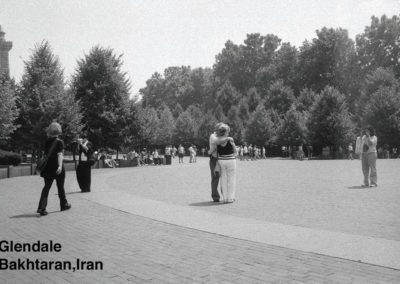 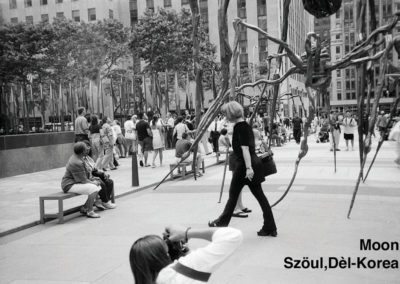 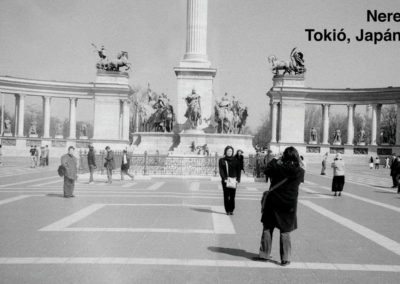 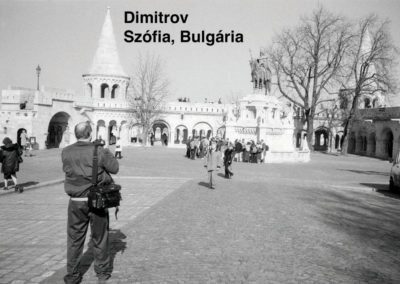 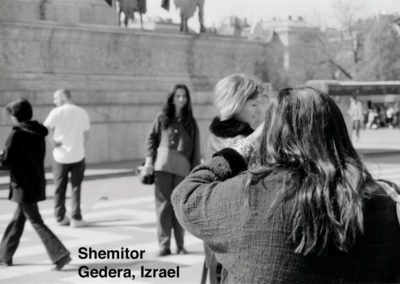 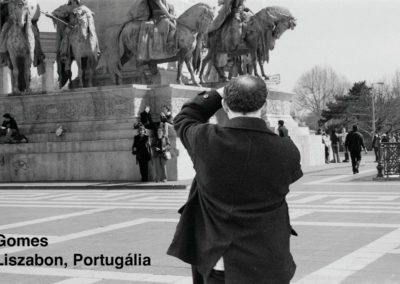 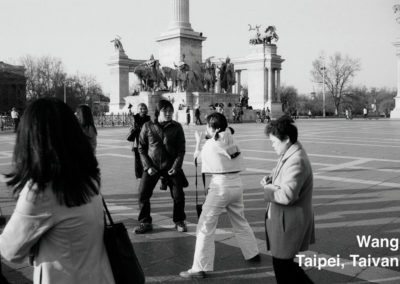 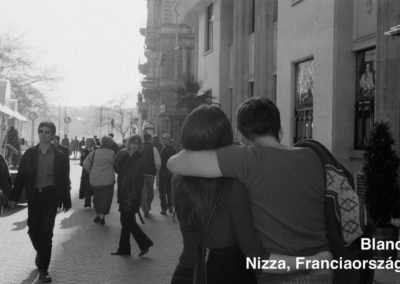 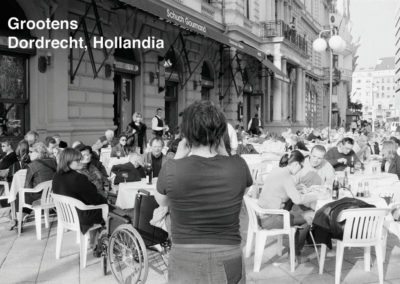 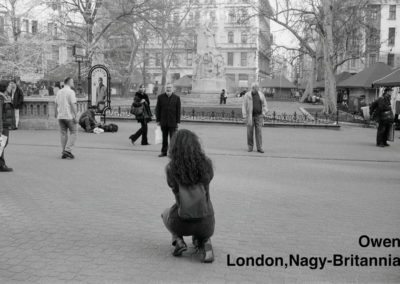 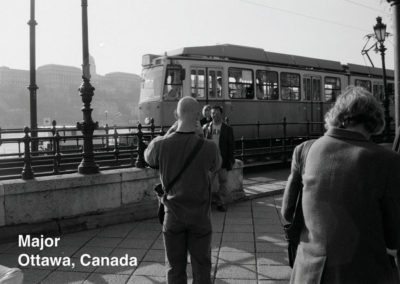 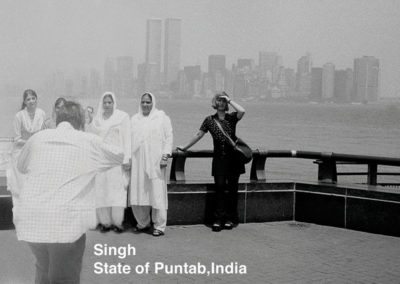 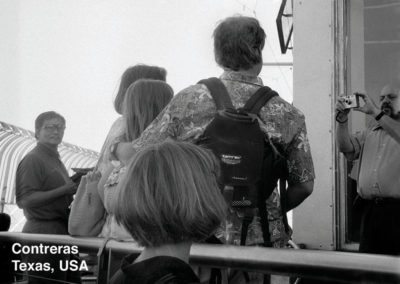 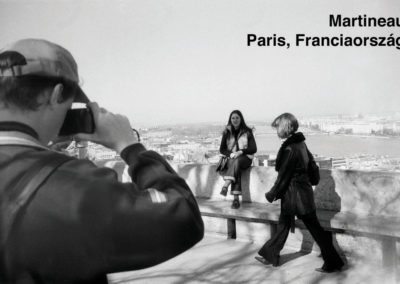 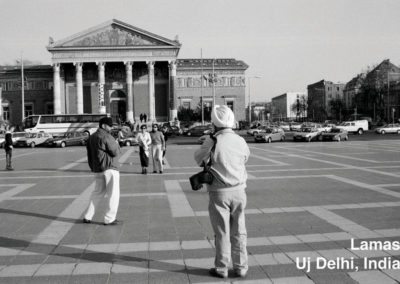 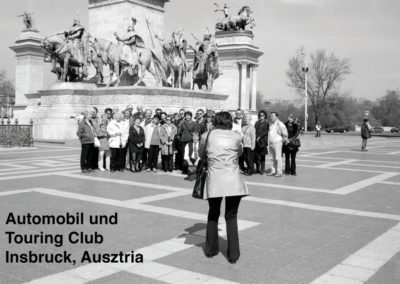 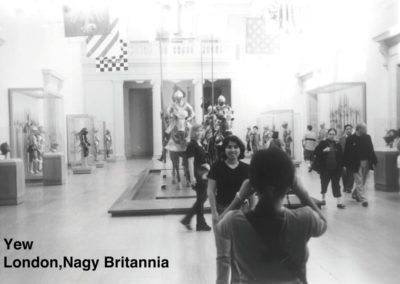 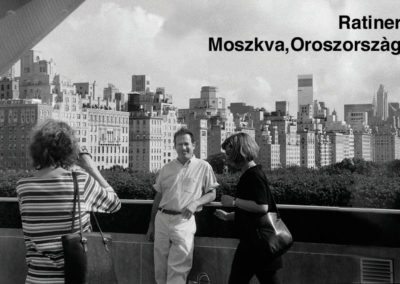 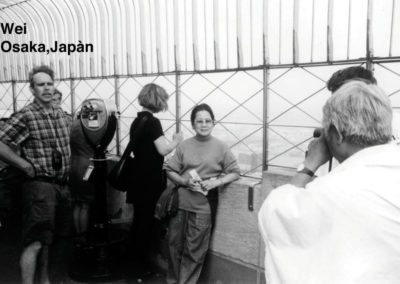 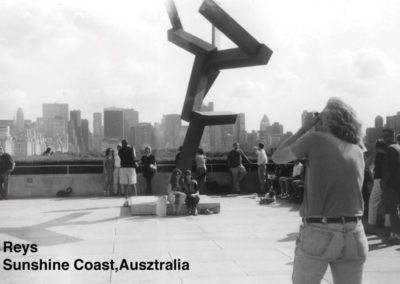 The world does not have a centre. We cannot say that New York is the centre of the world. Nevertheless, a lot of people wish to visit the famous sights of the world, those locations that are regarded as the centres (the world has not only one but several centres). They want to see with their own eyes all that they have already seen in films and photos before. They look for direct, “real” personal experiences. Travelling and tourism have technologically developed to such an extent that today we can get with relative ease to any place on earth within 36 hours. But what is reality and what is a real experience? What, then, can we see? Among many other things, we mostly see the other tourist: a swarm of travellers covering the characteristic landmarks of a city. To cite Zsófia Bán citing Jorge Luis Borges, we see the other, who is the same: a traveller, who is exactly the same as we are. We travel far away to return to ourselves.

Luca Gőbölyös spent three months in New York last year. During that time, a lot of friends from home visited her, and as is only proper, she guided each to the obligatory sights of the city. She herself seemed to have become somewhat bored with the famous spots she had seen so many times. At the same time, she became more and more interested in the people she saw. Everyone wanted to record themselves, their families and friends, to take home the proofs of their having been there in reality. In this respect, the tourists coming from Seoul or Japan, the Czech Republic, Mexico, Belgium, Hungary, etc., are in complete unison. Furthermore, the place itself, i.e., whether the tourists or photographers are visiting New York or Budapest, does not make the slightest difference. These places are governed by implicit international norms. One of these is that tourists try to stay out of the line of sight of other tourists’ camera. Yet despite all precautions, the crowd is continually taking pictures of itself.

Last year in New York, and then back at home in Budapest, Luca Gőbölyös started to interfere in people’s private space. She photographed the tourists taking photos, and deliberately stepped into or stood in the space of their photos. The person taking the photograph did not notice the young female figure in black clothing. She became Walter Benjamin’s flâneur, the stroller who kept watching and recording the traces of people, unnoticed, to become a detective almost unwillingly. She created a detective story, which, as one might know from her previous work, is not unfamiliar ground for her.  She remained invisible, merged with the crowd of metropolitan tourists. She transformed herself into a phantom, who is now standing somewhere in the world: in the photographs of tourists from Seoul or Japan, the Czech Republic, Mexico, Belgium, Hungary, etc. She has been travelling around the world as a spectre. C.f.; “A spectre is haunting Europe, …”, I cite Derrida citing Marx and Engels.

The means of collecting real experiences, fulfilling and documenting desires, is the automatic camera. The shutter of her camera was released not by her, but by three friends of hers who were also tourists themselves. The professional photographer emerges from the background and, instead of being the observer, she becomes the observed. She releases the composition from her own hands, yet she continues to direct the hands of others, as a ghost. While she watches and arranges things, the threads of subject and object become inextricably intermingled. The subject and the world can be no longer differentiated. Tourists are photographing tourists, a photographer photographing photographers – a circle turning on itself.

In the pictures taken atop of the World Trade Center, the city often cannot be seen at all behind the people. The city remains invisible, haunting behind them. Thus, the real motivation is plainly revealed: the travellers want to remember themselves; their original intention is to create something to remember, with a past in the future in the back of their minds. Temporal relations slide into one another. “Time is out of joint”, to cite Derrida citing Shakespeare. As space too is thrown out of joint by travel, spatial relations become confused and unfathomable in the photograph. It is difficult to reconstruct the perspective and to state exactly where the black-dressed ghost stands, and whether or not the person taking the photograph can see her. Only we, the outsiders looking at the photo itself now, know that the photographer photographing the photographer could see her, and that she would be a part of the photo that is before us now. Only those beyond the confines of the circle are able to reconstruct the story: we who are familiar with it; we who see who sees and who is seen; we who cite the citers. Luca Gőbölyös is simultaneously within and without. For us, the tourists are the ground, and Luca Gőbölyös is the figure; while from the tourists’ point of view, she is the unnoticed ground. She returns as a spectre in the pictures, haunting the tourists’ photos.

Luca Gőbölyös, after having taken these photos, tells her “victims” the plain truth of her machinations. Afterwards, she takes accurate notes of the places she will visit with their help, and in the end, the unknown foreigners will also remember the strange woman in black clothes when back at home they look at their own photographs. The spectre becomes real.

For that matter, reality has become a spectre. We can no longer go up on top of the World Trade Center, where a portion of the photographs have been taken; we can only see the projected light-spectre of the building (and by now, not even that – the editors). And while the spectre reveals herself, becomes real, the photographer who actually took the majority of these photographs takes over the role of the ghost and has become an eternal part of this project, as well.