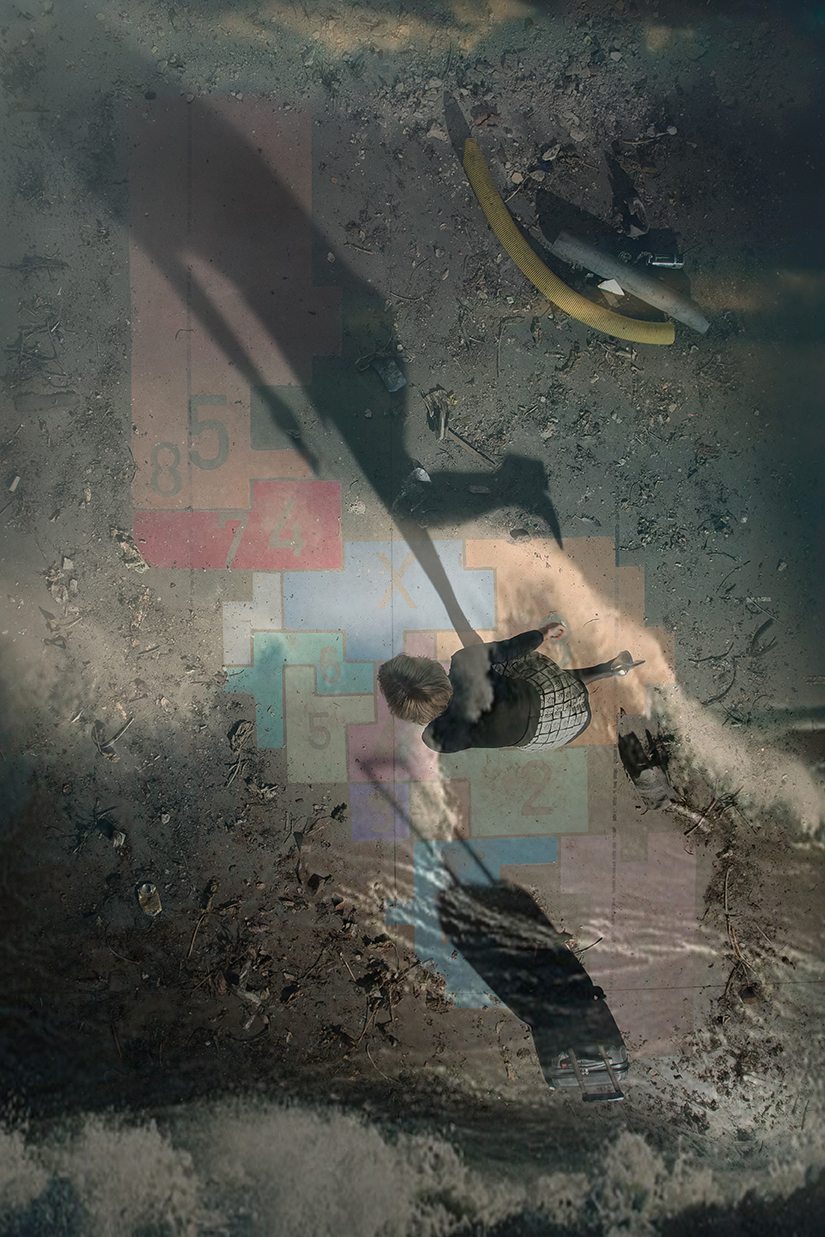 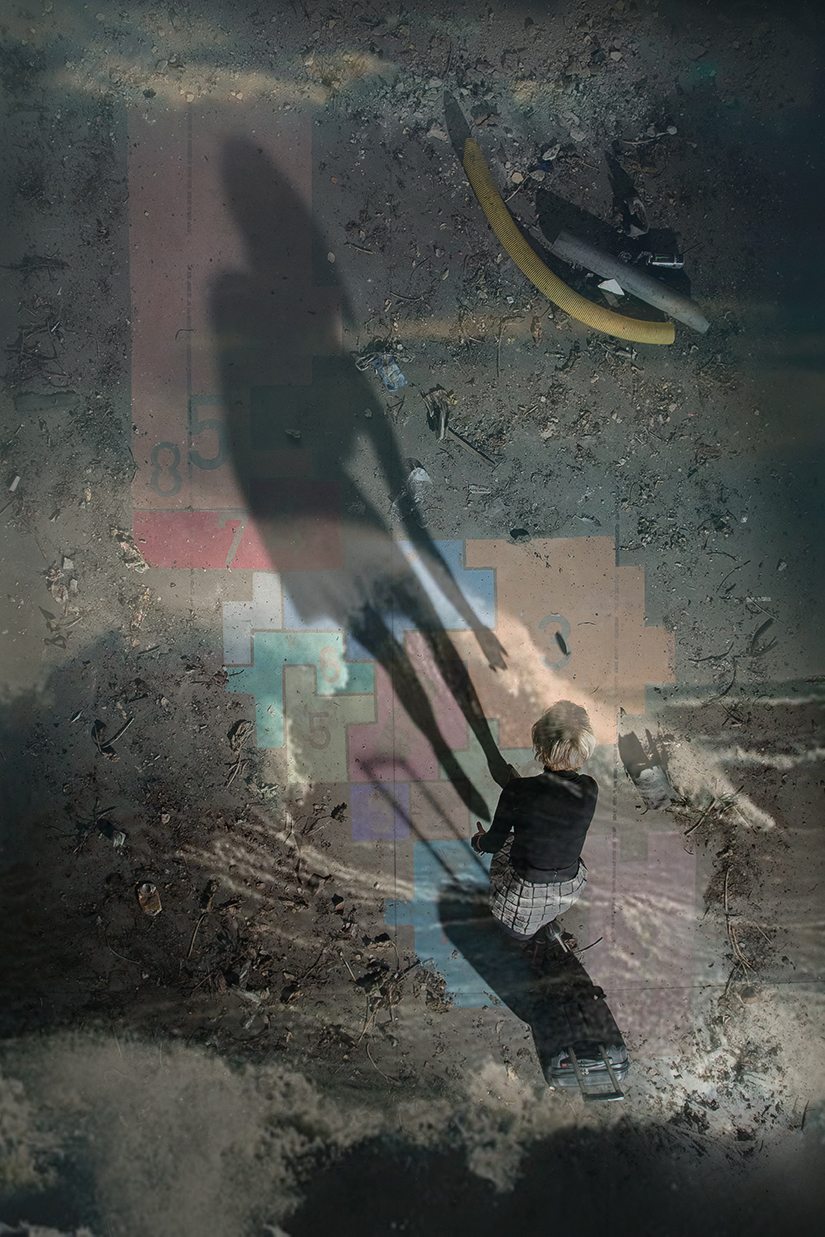 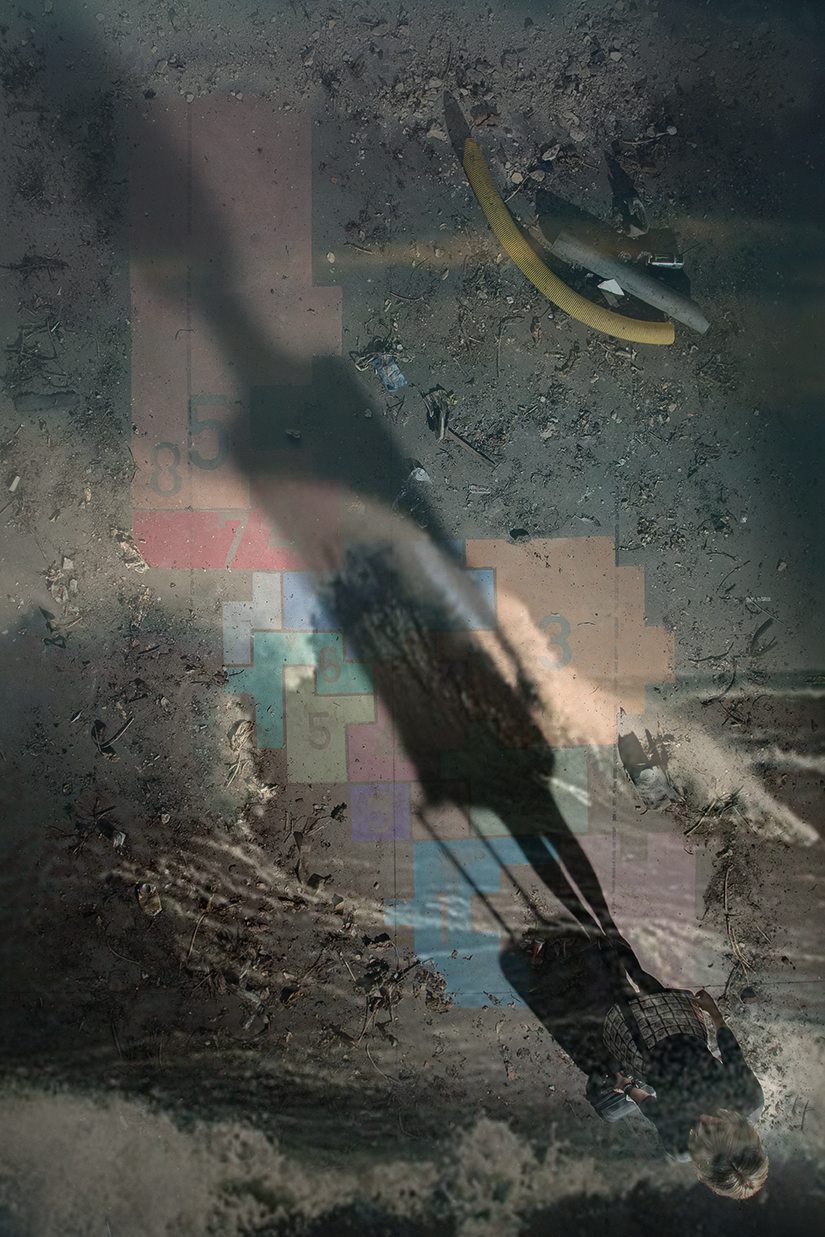 In this work, with my bouncing figure on the map of Europe, I symbolize the arduous pursuit of space, homelessness, and the continuous re-starting that is life itself. It is my personal reflection on the refugee crisis, since I myself am currently living in Germany, partly as a stranger as well.

For as long as there are wars within and between nations, there will always be refugees. In recent years, they arrived in ever-increasing numbers in the European Union and Hungary. They come from centers of worldwide crises and are headed towards countries that are not too far away, in hope of a safety that is a not merely an illusion.

The film has two layers. In the first one, I’m trying to reach the “Promised Land”, capering in high heels through a Europe, the map of which has been transformed into a hopscotch. In the second, we see a stormy sea with huge waves which, by appearing to wash away the road, make my progress more difficult.

It is one of the most popular games in the world: its spaces scratched on the ground or drawn on the asphalt with chalk or soft stone can be found in all the five continents of the world, even in Nepal and the Pacific Islands. In English-speaking countries, it is called hopscotch, in Spanish parma, in German, among others it is called Himmel und Hölle, that is, heaven and hell. This name refers to the origin of the game: it is necessary to walk through the path of life, and while we are getting through the various obstacles marked on the ground (good or bad), we reach the afterlife. The players have a pebble or a broken piece of roof tile or flower-pot that they throw onto the first field, and then they jump there on one leg, bending down and picking up the pebble only to throw it to the next field, on to which they jump still on one leg, and the game goes on this way. A player is at fault if they throw the pebble on the line or not onto the right field, or if they do not jump to the required field or if they put down their leg. Thus, this round is lost and the other player comes next or, according to more stringent rules, they must go back to the start field.

I chose this game because it symbolizes the path of life, and we have to get through the obstacles to reach the finish line, that is, the imaginary or real heaven. My hopscotch, however, differs from the original game; my version is more complicated but uses the basic elements of the original one: earth, hell, and heaven. When I was creating it, I used the map of Europe in a grid system that shows the countries according to their population. I have narrowed down this map to the countries of the main refugee routes crossing Hungary and have numbered them accordingly. Namely, in the hopscotch I set up there are alternative paths through which heaven, that is, Germany can be reached. Since refugees come from many different countries, I have nominated the sites of making land starting places, that is, Turkey and Greece as field number one, which originally symbolizes the land. As we are taking the next step on the numbered fields, we reach “hell”, that is, Hungary, which I marked with X, the same field as on the traditional game of hopscotch, which must be jumped over if the player does not want to drop out of the game.

On the film, there is one “player” who is trying to accomplish this almost impossible “task”: I myself. I’m hopping on one leg all the way wearing high heels, tossing a pebble always to the next field and then hopping after it in order to get to Germany, that is, to heaven (currently I am partly living here as well) where I can finally put down both of my legs. When I make a mistake, I lose my balance, or throw the pebble in the wrong field or I step on the line, the movie then rewinds and I can start hopping from the beginning. I often make a mistake; the task is quite difficult and it is full of struggle to “go through Europe”. When I reach the finish line after much hard work, I become transparent and absorbed and the whole struggle starts from the beginning. Whenever I start, I pull my suitcase into the picture, which, however, I’m forced to leave at the start line, as I cannot advance with it. It is an important part of the project that my shadow, in a figurative sense the “phantom” of refugees, is projected through Europe during my “journey” being ahead of me all along.

The sound of the video is a child poem recited by my daughter (4 years old), repeating in several layers:

I’m not walking a great distance,

reaching where the world will end,

won’t be there for long,

I am wearing high heels and short skirts because they symbolize that anyone can become a refugee. On my skirt, the American Statue of Liberty can be seen as the symbol of longing for freedom and as the symbol of America, whose role in the current refugee crisis is controversial. 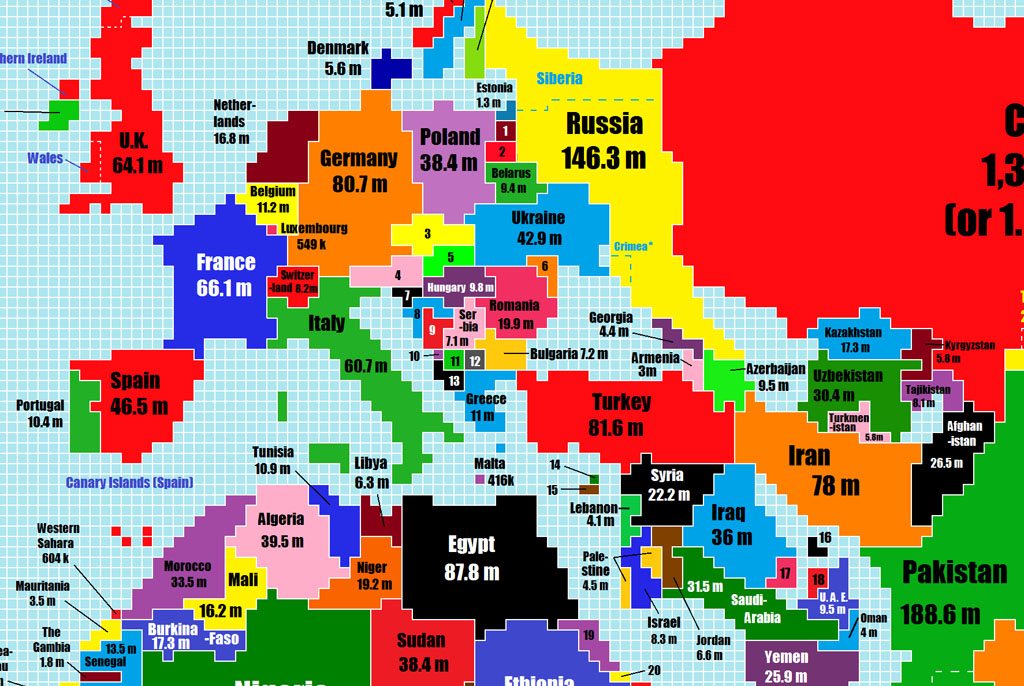